"I am willing it (the Bank) should expire in peace; but if it does persist in its war with the government, I have a measure in contemplation which will destroy it at once, and which I am resolved to apply, be the consequences to individuals what they may." – Andrew Jackson

Though the real owners / bosses of The Bank were based in Europe, Nicholas Biddle of Philadelphia ran the United States end of Rothschild’s vast criminal network. Biddle, who had graduated from the University of Pennsylvania at the age of thirteen, was a brilliant financier and highly formidable adversary. To paraphrase a line from the classic film, The Godfather, Biddle “carried around politicians and newspapermen in his pocket like so many nickels and dimes.”

In January 1832, Biddle's lapdogs and dupes in Congress, chief among them being Senators Daniel Webster of Massachusetts and Henry Clay (recall the “corrupt bargain of 1824?”) of Kentucky, introduced early Bank re-charter legislation. Although the charter was not due to expire until 1836, Biddle and his boys figured, correctly, that the current Congress would re-charter the Bank, and that Jackson, in a re-election year, would not risk losing votes in Pennsylvania and other commercial areas by vetoing it. They figured wrong.

THE LEADERS OF THE PRO-BANK FORCES 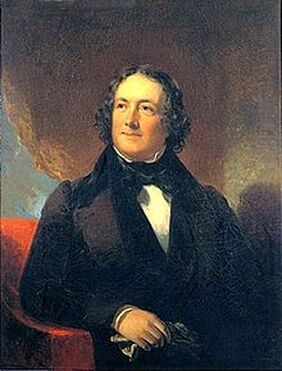 Above: Nicholas Biddle -- Rothschild's American agent
Biddle 's Boys: “The Immortal Trio” --  disloyal Vice President and Secessionist John C Calhoun, Senator Daniel Webster, former House Speaker who was behind the anti-Jackson “corrupt bargain” of 1824, now a Senator, Henry Clay
Jackson's opposition to the Bank became his obsession. Supported by strong attacks against the Bank by some of the pro-Jackson newspapers, Jackson vetoed the Bank Re-charter Bill and Congress lacked the 2/3 majority needed to override a presidential veto. Jackson then ordered the federal government's deposits to be removed from the Bank and placed in state banks. In his veto address to Congress (July 10, 1832) Jackson denounced the Bank as a tool of the wealthy and well-connected to further enrich themselves at the expense of the people.

“Is there no danger to our liberty and independence in a bank that in its nature has so little to bind it to our country? Is there not cause to tremble for the purity of our elections in peace and for the independence of our country in war? Controlling our currency, receiving our public monies, and holding thousands of our citizens in dependence, it would be more formidable and dangerous than a naval and military power of the enemy.”

"It is to be regretted that the rich and powerful too often bend the acts of government to their selfish purposes. Distinctions in society will always exist under every just government. Equality of talents, of education, or of wealth cannot be produced by human institutions. In the full enjoyment of the gifts of Heaven and the fruits of superior industry, economy, and virtue, every man is equally entitled to protection by law; but when the laws undertake to add to these natural and just advantages artificial distinctions, to grant titles, gratuities, and exclusive privileges, to make the rich richer and the potent more powerful, the humble members of society-the farmers, mechanics, and laborers-who have neither the time nor the means of securing like favors to themselves, have a right to complain of the injustice of their Government. There are no necessary evils in government. Its evils exist only in its abuses. If it would confine itself to equal protection, and, as Heaven does its rains, shower its favors alike on the high and the low, the rich and the poor, it would be an unqualified blessing. In the act before me there seems to be a wide and unnecessary departure from these just principles."
1. “The Downfall of Mother Bank” -- President Jackson brandishes an 'Order for the Removal of the Public Money deposited in United States Bank -- sending small figures running for cover. Biddle is depicted as the devil with horns. 2. A satirical cartoon on the failure of Henry Clay, Daniel Webster, John Calhoun, and Nicholas Biddle to save the Bank. The four are blown up as Jackson enjoys a smoke.
NOVEMBER, 1832


Though early re-charter was killed and Jackson was whacking away at the roots of the Bank, Biddle and his agents still had four years left to re-charter the Bank -- if they could get rid of Jackson. To that end, Biddle -- who had already been funding crooked politicians and anti-Jackson newspapers -- poured big money into the 1832 presidential campaign of Senator Henry Clay. After the bank re-charter veto Biddle wrote to his trusted puppet Clay:

"You ask what is the effect of the veto. My impression is that it is working as well as the friends of the Bank & of the country could desire. I have always deplored making the Bank a party question, but since the President will have it so, he must pay the penalty of his own rashness.

As to the veto message I am delighted with it. It has all the fury of a chained panther biting the bars of his cage. It is really a manifesto of anarchy … and my hope is that it will contribute to relieve the country from the dominion of these miserable people. You are destined to be the instrument of that deliverance, and at no period of your life has the country ever had a deeper stake in you. I wish you success most cordially because I believe the institutions of the Union are involved in it.” (bold emphasis added)

The 1832 Democrat National Convention was the first ever convention of what was now known as the Democrat Party (which should in no way be confused with today’s corrupted Marxist Democrats!). It was held in Baltimore, Maryland in May of 1832. In addition to re-nominating Jackson, Martin Van Buren was chosen to be his Vice Presidential “running mate” – which meant that one of Jackson’s deadliest enemies, the southern secessionist and pro-Bank agent John C Calhoun, would no longer be Vice President.

In spite of attacks against Jackson by agents of the central bank and anti-Jackson / pro-Biddle newspapers, the people of states north and south, stood with Jackson. He was overwhelmingly elected to a second term over Biddle’s boy.
Jackson defeats the snake Clay in a landslide!
PDF & PAPERBACK BOOKS BY M S KING
(Click on image)
Tweet
E-Mail: GreatTomatoBubble2@Gmail.com
Post the link for this page to your FaceBook. Simply copy address below ...
realhistorychan.com/andrew-jackson-vs-central-bankers.html
... then click on the F icon and post to your page -- Thanks. 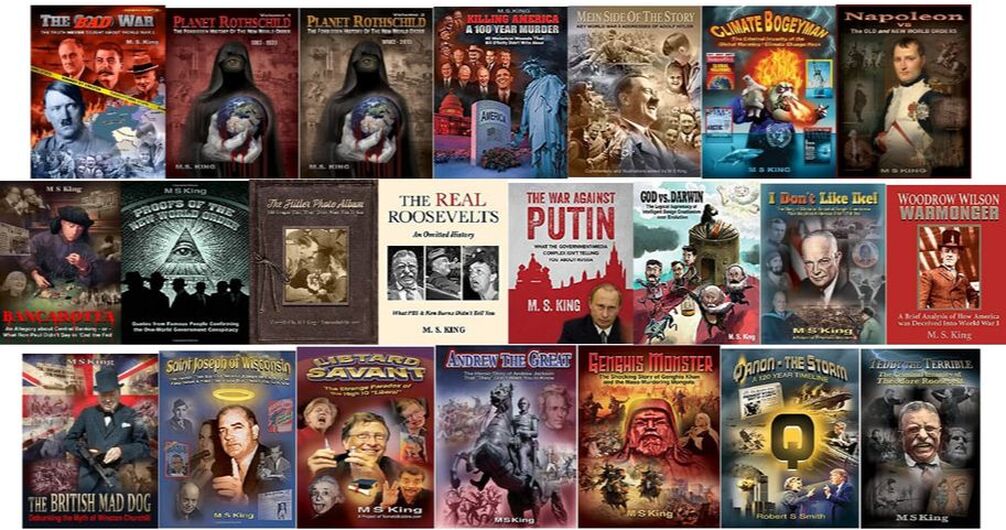 BE SURE TO SUBMIT E-MAIL THERE