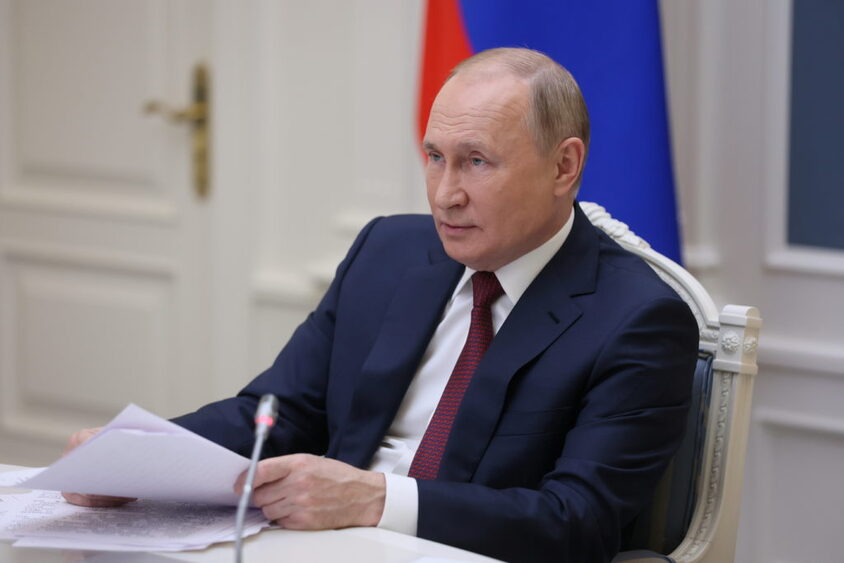 The moves by the Russian leader were his most blatant yet in a confrontation with the West that threatens to escalate into the biggest military action in Europe since World War II.

Vlad the Bad Putin has essentially just established the pro-Russian eastern Republics of Donetsk and Luhansk as Russian protectorates -- and there's not a darn thing that the Globalists at the Council on Foreign Relations, their bullhorn buddies at "the paper of record," and their tethered NATO war dogs can do about it. It's not that the mighty US-led coalition of America and Europe hasn't the military capability  to go toe-to-toe with Russia, you understand. No.

The reason why "the free world" will not stop Putin's "invasion" of the region known as "Donbass" is because Trump and the patriots, not the Globalists, are in control. You can be sure that this deal to deactivate the eastern European trip-wire for World War III -- much like the deal which had earlier deactivated another dangerous trip-wire in Syria -- had already been worked out by Putin and Trump -- the latter, not "Joe Biden," still commanding the US military.

Of course, this won't stop the breathless propagandists at Sulzberger's Slimes from pining away for yet another of their European bloodbaths to reinvigorate their dying New World Order. Not this time, Hymie. Sorry.

Let's clean up a few verses of this latest war song.
Don't believe the hype. There isn't going to be a war.
Slimes: President Vladimir V. Putin on Monday ordered troops into separatist-held eastern Ukraine ....
Rebuttal: Eastern Ukraine is not "separatist held." The people are Russian; they speak Russian; they love Putin; and they want nothing to do with the pro-NATO western wannabees and thugs of the western portion of Ukraine. Nobody is "holding" the people.

Slimes: ... and hinted at the possibility of a wider military campaign,
Rebuttal: Having watched the Putin speech (with English captions) in its entirety, the "Editorial Board" of The Anti-New York Times must have missed these "hints" -- so subtle the "hints" must have been. Did he wink or something?

Slimes: After the speech, state television showed Mr. Putin signing decrees recognizing the so-called Donetsk and Luhansk People’s Republics
Rebuttal: What do "youse guys" mean by "so-called" republics? If the people, virtually unanimously, desire to be independent of western political intrigue and embrace Russia, then why denigrate their proclaimed status as independent republics with the insulting term, "so-called?" Should we refer to the United States as a "so-called" republic because the new nation had separated from Britain in 1776?

Slimes: ..... which were formed after Russia fomented a separatist war in eastern Ukraine in 2014.
Rebuttal: No no no no no! You dad-gum ever-projecting liars! The Donetsk and Luhansk Republics were formed after CIA-Soros-McStain-Nuland-Mossad and company fomented a "Color Revolution" coup which violently overthrew the Russia-friendly government based in western Ukraine -- in Kiev -- and installed a pack of corrupt and maniacal anti-Russian puppets who had been tasked with oppressing the easterners and kicking-off World War III.
Donetsk and Luhansk  are happy to be free from the control of the type of western Ukrainian criminals that scum like the late (executed, we believe) John McStain had installed in 2014.
Slimes: The action by Mr. Putin, who has commandeered the world’s attention....
Rebuttal: No. It is Fake News hype about World War III that has "commandeered the world’s attention."

Slimes: .... with an enormous deployment of troops along Ukraine’s border.
Rebuttal: That border along which this "enormous deployment" was put in place, is mainly shared with Russian Donetsk and Luhansk -- whose citizens have never regarded themselves as part of the fake state of Ukraine (which has been historically, culturally, racially Russian for a 1000 years).

Slimes: Putin even went so far as to describe Ukraine’s elected pro-Western leaders as stooges and cast them as the aggressors
Rebuttal: Well ... he's right, ya know.

Slimes: The White House said Mr. Biden would impose sanctions against people doing business in the separatist regions ..... The leaders of the European Union condemned the recognition “in the strongest possible terms,” and the secretary-general of the United Nations said the move was “inconsistent with the principles” of the U.N. charter.
Analysis: As previously stated, the huffing and puffing Globalists can't do anything about it -- because Trump and Putin make a mighty awesome pair.
1. Trump the Peacemaker has been undermining the leadership and unity of the NATO war machine all along. // 2. The press now openly laments the fact that anti-Russian NATO has been neutered. // 3. Patient and cunning warriors Trump & Putin are dismantling the NWO.

Editor: The similarities between recent events and the "Czech Crisis" of 1938 are remarkable. Only this time around, (((they))) aren't going to get their World War.
E-mail: GreatTomatoBubble2@gmail.com