Congratulations to reader with the E-mail: ju*******ik@gmail.com -- Hopefully, ju*******ik@gmail.com, you clicked your E-mail link and are reading this page now! If so, you may request ONE free AUTOGRAPHED paperback from the "Banned Books" page and submit a selection. Use offer code "WINNER" in Inquiry Form. After we verify E-mail, expect book in 7-9 days.  * Must claim by 03/10/2022
Tweet

There is a remarkable similarity between the "Czech Crisis" of 1938-39 and the "Ukrainian Crisis" of 2022. In both cases, a peace-seeking but strong national leader -- relentlessly pushed and viciously slandered by the Globalists and their vile henchmen in the Piranha Press -- was forced to make a move upon a Globalist-occupied neighboring state which was abusing his countrymen there and being used as a staging ground to menace the Homeland itself.

In both cases, these leaders, for years, tried in vain to resolve an unjust situation diplomatically; but were repeatedly lied to and threatened by the Globalist-owned "free world" states to the West.

In both cases, these leaders, backed by a show of military resolve, finally deactivated a world war triggering point and set up (or recognized) a pair of friendly protectorates.

And, of course, in both cases, Sulzberger's Slimes and the rest of the whore-pack Judenpresse squealed in horror, "Invasion! Invasion!" as the United States imposed sanctions.
1939: Hitler recognizes independent protectorates -- USA responds with sanctions.

*
2022: Putin recognizes independent protectorates -- USA responds with sanctions.
Putin = Hitler? Actually, in many ways, yes -- which is a good thing in our book.
Fortunately for the world, the one key difference here is that back in 1939, the deactivation of the crisis in Europe was short-lived because the Globalists had a backup plan for provoking a war with Hitler's peaceful Germany through Edward Rydz Smigly -- the expansionist-minded mad military dictator of Poland. But in 2022, there will be no war against Russia because the Globalists are not in control -- at least not to the extent they need to be in order to pull off a major operation such as a world war.

Also working in favor of peace and justice this time around is the power of Russia itself -- a nation which, when Vlad the Bad came to town more than 20 years ago-- was on its knees and relatively toothless in the face of US / NATO / CIA / NGO aggression all along its frontiers and especially in the former Yugoslavia. It was Putin the Great who brought Russia back to a point where, by 2016, he was able to talk tough and back it up.

***
UK Express: (October 18, 2016)
Headline: Vladimir Putin warns Americans are in 'impending and grave danger' as he accused the United States of lying over its nuclear capabilities and revealed Russia continues to develop new generation warfare.

Putin: “I’m not going to list everything, all that matters is we have modernized our military-industrial complex and we continue to develop new generation warfare. No matter what we said to our American partners to curb the production of weaponry they refused to cooperate with us, they rejected our offers, and continue to do their own thing.

The missile defense systems are continuing to be positioned. That means we were right when we said that they are lying to us. ... So they built this system and now they are being loaded with missiles.... We know that technologies advance. We even know in which year the Americans will accomplish a new missile, which will be able to penetrate distances of up to 1000km, and then even further. “And from that moment on they will be able to directly threaten Russia’s nuclear potential.

We know year by year what’s going to happen and they know that we know. It’s only you (the media) that they tell tales to, and you spread it to the citizens of your countries. Your people, in turn, do not feel a sense of the impending danger - this is what worries me. How can you not understand that the world is being pulled in an irreversible direction?
***

Yes indeed; though all of bewildered Normiedom remained oblivious to the severity of the situation, those were some very dark and dangerous days in 2016. And with all expecting Satan's Bitch to take over where the warmongers of Team Obongo would leave off in 2017, World War III against Russia & China -- or at least a pair of really nasty regional wars in Europe and Syria (as we warned at the time)  -- seemed inevitable. George Soros was even threatening as much! (here)

It was the stunning rise of Donald Trump -- coupled with the resurgence of Russia (both elements were necessary) -- that saved the world from the planned international bloodbath. But don't hold your breath waiting for either Trump or Putin to be awarded the "prestigious" IgNobel Peace Prize any time soon. Only Globalist warmongers and Communist scumbags win those. 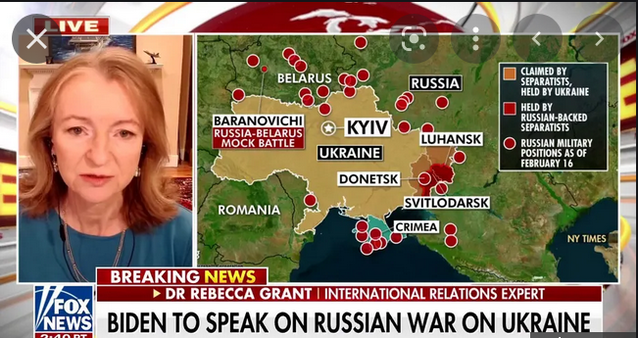 Russia, like Germany in 1938-39, has every right to overthrow an abusive and hostile puppet regime that the Globalists set up on its border.
Hitler: "For months the Germans in Sudetenland have been suffering under the torture of the Czechoslovak government. The Sudeten German population was and is German. This German minority living there has been ill-treated in the most distressing manner. ... It is a lie when the outside world says that we only tried to carry through our revisions by pressure. On my own initiative I have, not once but several times, made proposals for the revision of intolerable conditions. All these proposals, as you know, have been rejected - proposals for limitation of armaments, proposals for limitation of war making."
Reichstag Address, October 1, 1938 / (Read his amazing speeches in "Mein Side of the Story")

Donate to Help us Grow
Boobus Americanus 1: I read in the New York Times today that Biden is imposing strict sanctions on Putin.

Boobus Americanus 2: Putin is acting just like Hitler did in Czechoslovakia.

Editor: "Darn tootin'?" --- That's rather mild. Heaven must be rubbing off on you.
E-mail: GreatTomatoBubble2@gmail.com