Congratulations to reader with the E-mail: 42*****u@yahoo.com -- Hopefully, 42*****u@yahoo.com, you clicked your E-mail link and are reading this page now! If so, you may request ONE free AUTOGRAPHED paperback from the "Banned Books" page and submit a selection. Use offer code "WINNER" in Inquiry Form. After we verify E-mail, expect book in 7-9 days.  * Must claim by 03/11/2022
Tweet 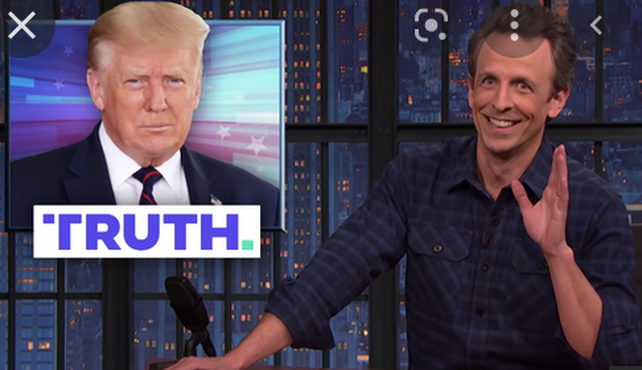 The usual suspects are really hammering away at the "glitches" ™ associated with the limited rollout of the "app" element of Truth Social. Blinded by hatred and fear, they are again walking right into Trump's favorite trap of inducing negative free publicity for himself and his initiatives. As an old marketing guy myself, I appreciate (to a point) the old adage: "There's no such thing as bad publicity." And the news of these "glitches" ™ and the long waiting list are buying Truth Social TONS of free publicity and generating curiosity. Go ahead and laugh -- dumb asses!

The smell of fear of Truth Social's coming "drip-drip" permeates the polluted airwaves of "mainstream media." (((They))) know that Trump's purpose this time isn't merely about campaigning, fighting and name-calling, as he used to do on Twitter. Oh, sure -- they'll be plenty such Trumpian antics to amuse the base and abuse his enemies. But there's something more to Truth Social -- and it's got the Globo-Marxist Axis of Evil pissing themselves already.
The Truth Social logo for the app (Image 1), when rotated, looks like a leaking faucet. "Drip-Drip" revelations coming, get it?
Since long before noticing the interesting logo for the Truth Social app, we have been saying that Truth Social will be the "drip-drip" weapon with which so many nasty truths will be revealed and forced into the "mainstream news." If Fake News reports on the audacious "drips," the shock effect will be amplified. If they ignore the "drips," then the press itself will be rendered irrelevant as even the most dimwitted normies will lose faith in their media masters. That does appear to be part of "The Plan." And speaking of the plan, a character with the handle "Q" has started posting on Truth Social. Of course, anyone can open up an account and choose any name he wants to -- but there are sound, logical reasons to suspect that the real "Q" has returned Consider the following:

1. This poster named Q managed to bypass the enormous waiting list "glitch" ™ before Trump himself and before TS CEO Devon Nunes. The join date of February 9 was actually before the app was opened to the public.

2. Dan Scavino and Kash Patel (both trusted members of Trump's inner circle and outspoken "conspiracy theorists") have replied to this Q member. Why would they confer such respectability upon an imposter / prankster who is attempting to dupe millions of Trump supporters?

4. Q's Truth Social of February 24 -- was an image and reference pertaining to the nuclear facility at Chernobyl, in Ukraine. At about precisely the same time or even just a few hours later, the first heard reports about the Russians capturing Chernobyl became public. How did this Q know what was happening or going to happen, at Chernobyl so soon?
1. A pre-opening join date of February 9th -- How is that possible? // 2. February 24 post about Chernobyl, replied to by CEO Devon Nunes with "Who is Q?" // 3. The news of Chernobyl breaks. What does it mean?
Delightfully concurrent with the soon-to-be full rollout of Truth Social and the apparent return of Q, we are witnessing an unleashed Donald Trump whose recent threats to expose the fraudulent election of 2020 and his attacks upon the Deep State have reached a whole new level of audacity. His words are even stronger and bolder than anything which the late great Joe McCarthy ever stated -- and he will soon have the media clout to back his threats.

From his most recent speech at the CPAC (Conservative Political Action Conference) event in Washington:

"I am thrilled to report that our incredible movement, a movement that nobody has ever seen anything quite like it. There has never been anything like it before. It is strong and growing stronger every single day."

"The socialists, Globalists, Marxists, and Communists who are attacking our civilization have no idea of the sleeping giant they have awoken. They cannot even begin to imagine the brave and righteous spirit they've unleashed in men and women, like all of you here today, and this is some crowd.
*

Tell it, Trump. Tell it!
Joe McCarthy fought the good fight against the Communist and Globalist scum that had infiltrated America's institutions. He ultimately failed, but Trump has the advantage of NSA surveillance, Military Intel & Special Forces, the Internet and soon, Truth Social all behind him.
Boobus Americanus 1: I read in The New York Times today that a limited rollout of Trump's Truth Social had a lot of glitches.

Boobus Americanus 2: That's got to be embarrassing for a man with his ego.

*
St. Sugar: You want to see "embarassing," Boobuss? Wait until you see what he sstarts possting about your political heroess.

Editor: Exactly as foretold by Q, the 31st Demonrat has just announced that he's not seeking re-election this fall.