Congratulations to reader with the E-mail: ra******7k@gmail.com -- Hopefully, ra******7k@gmail.com, you clicked your E-mail link and are reading this page now! If so, you may request ONE free AUTOGRAPHED paperback from the "Banned Books" page and submit a selection. Use offer code "WINNER" in Inquiry Form. After we verify E-mail, expect book in 7-9 days.  * Must claim by 03/14/2022
Tweet 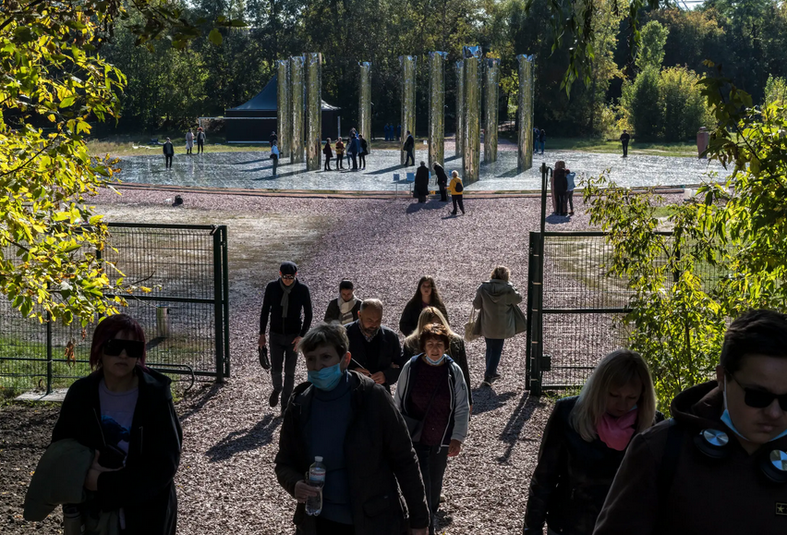 This time, Vlad the Bad has gone too far! Leveling Ukrainian cities to the ground, driving millions into refugee status, crucifying babies -- OK --- all's fair in love and war. But conducting strikes "near" a memorial to the song that never ends about the event that never happened? Shame!

"Jewish groups and institutions around the world condemned a strike in Ukraine’s capital, Kyiv, (when did Kiev become bastardized into Kyiv?) in the area of the Babyn Yar Holocaust Memorial Center, where tens of thousands of Jews were killed by the Nazis in a two-day massacre during World War II."
(emphasis added)

Waaaah! Waaaah! Waaaah! Never mind the "mass suffering" of the Ukrainian people (albeit imaginary). It's always about and only about (((them))), ain't it?
Oy vey!
Waaaah! Waaaah! --- Israel stands with Ukraine (because that's where so many kidnapped Ukrainian women (and children?) are shipped to for profitable prostitution.)
Now, about this Babyn Yar (fka Baba Yar) mass shooting "massacre" said to have been committed in Ukraine (Soviet Union) by the German SS in 1941. As it is with the Bullschwitz story, what "historians" now "know" about this event originates with the oh-so-reliable "investigators" (cough cough) of Stalin's ESCEIAGFITADTCCCFPOSEIUSSR -- (Extraordinary State Commission for the Establishment and Investigation of the Atrocities of the German Fascist Invaders and Their Accomplices and the Damage They Caused to Citizens, Collective Farms, Public Organizations, State Enterprises and Institutions of the USSR) -- No joke, that was the actual full name of the "atrocity" investigative commission! By the way, that was the same greasy bunch of bullshit artists that also tried to pin the Jewish NKVD's 1940 bullet-to-the-head massacre of 10,000 Polish officers at Katyn Forest on the big bad Germans. Can you say "projection?" Some of the ESCEIAGFITADTCCCFPOSEIUSSR "findings" were so ridiculously outrageous that even the corrupt, testicle-crushing inquisitors running the 1946 Nuremberg Kangaroo Court would not present them.

Applying the legal principle of Falsus in uno, falsus in omnibus (False in one, false in all) -- we may reject the "Extraordinary Commission's" Babyn Yar "Holocaust of Bullets" tale out of hand. This is not to say that terrorist Bolshevik "partisans" weren't sometimes summarily executed (they were) -- but the just and proper execution of the very monsters who had, in previous years, mass murdered millions of Ukrainian and Russian Christians should not be called a "massacre." The big bad "Nazis" never executed anyone who didn't have it comin' to him (or her). That's a FACT, jack!
The mythical imagery of Babyn Yar -- provided to western "historians" by Stalin, Kaganovich and their ESCEIAGFITADTCCCFPOSEIUSSR propaganda henchmen. Their "findings" were deemed to be too "over-the-top" by the criminals staging the Nuremberg Tribunals -- but some of which (such as Babyn Yar) are commonly accepted by the "whorestorians" of today.
Of course, Jewkraine's Soros-picked Criminal-in-Chief, Volodymyr Zelensky (cough cough) wasted little time in playing up the alleged strike which occurred "near" the Babyn Yar junkyard. From the article:

"Mr. Zelensky, who is Jewish, also alluded to the site’s history, saying on Twitter, “What is the point of saying ‘never again’ for 80 years, if the world stays silent when a bomb drops on the same site of Babyn Yar?”

Oh how we wish that the former degenerate "comedian" and pathological liar was actually telling the truth this time! From the Anne Frank Museum in Amsterdam, to the Bullschwitz Disneyland exhibit in Poland, to the "Memorial to the Murdered Jews of Europe" in Berlin, to the Babyn Yar junkyard in Kyev / Kyiv --- how righteously delightful it would be to see every last eyesore dedicated to the song that never ends about the event that never happened reduced to fiery rubble.

So sick of this lie.
CLASS ACT
1. Deviant TV clown (and new "hero" of "conservative" FOX news) Soros puppet Zelensky (left) drops his trousers and plays the piano with his genitals. // 2. Zelensky in black leather and high-heels does his sexy dance. // 3. Zelensky the childish, penis-obsessed, possibly queer pervert wearing only a guitar.

Huffington Post
More clown-talk from Zany Zelensky.
HOLOHOAX TRASH
1. Shoes on the Danube sculpture: Budapest, Hungary -- commemorates Communists (many of them Jewish) who were supposedly shot into the Danube. // 2. Ugly ghoulish 51-feet-tall Holohoax Memorial in Miami Beach. // 3. "Memorial to the Murdered Jews of Europe" -- a large hideous dagger (5 acres / 2711 concrete slabs) in the heart of Berlin.

Donate to help us grow
Boobus Americanus 1: I read in The New York Times today that Putin bombed a Holocaust Memorial.

Editor: Indeed. They'll never be another as great as The Great One.