JPMorgan Chase and other big banks should use their lending power to force cuts in greenhouse gas emissions.

The writers are fifth-generation members of the Rockefeller family.

If anyone needed further evidence that the Climate Con is just a false front for establishing One World Government, this anti-"fossil fuel" editorial -- submitted to the Slimes from three members of the Rockefeller Crime Family Dynasty -- ought to serve as the "convincer." After all, it was David Rockefeller himself who once wrote in his own book, Memoirs:

"Some even believe we [Rockefeller family] are part of a secret cabal working against the best interests of the United States, characterizing my family and me as 'internationalists' and of conspiring with others around the world to build a more integrated global political and economic structure - One World, if you will. If that's the charge, I stand guilty, and I am proud of it."

That statement perfectly mirrors what Congressman and President of the John Birch Society -- Dr. Lawrence Patton MacDonald (D-GA)  -- wrote, in 1975, for the Introduction of "The Rockefeller File" by Gary Allen:

“The drive of the Rockefellers and their allies is to create a one-world government combining Supercapitalism and Communism under the same tent, all under their control. … For more than one hundred years, since the days when John D. Rockefeller Sr. used every devious strategy he could devise to create a gigantic oil monopoly, enough books have been written about the Rockefellers to fill a library.

Do I mean conspiracy? Yes I do. I am convinced there is such a plot, international in scope, generations old in planning, and incredibly evil in intent.”


Eight years later, Congressman MacDonald was killed or disappeared when Korean Airlines 007 was either shot down or force-landed over Soviet airspace. How conveeenient.
1. The late David Rockefeller (seated right) with Jacob de Rothschild. The two crime families did both financial and political business together, and were regular attendees and sponsors of the notorious annual Bilderberg meetings which set the Globalist agenda for the coming year. // 2. A Birch Society classic -- "The Rockefeller File," by Gary Allen. // 3. Congressman Lawrence Patton MacDonald (distant relative of General George Patton) was an articulate and dynamic foe of the House of Rockefeller. He was taken out in 1983, at a time when he was considering a run for the U.S. Senate.
Because the original patriarch of this wretched clan was an oil mogul, these three Rockefeller heirs apparently feel that they speak with "moral authority" in calling for the end of "fossil fuels" -- a misleading term which the wholly-owned "scientists" of the original John D. Rockefeller coined in order to sell the moronic myth that oil and natural gas are finite resources derived from long-dead dinosaurs and plants. Let's examine a few choice excerpts of this Rockefellerian rubbish so prominently featured in the pages of "the paper of record" -- itself the product of another rotten New York Crime Family Dynasty which started its operation back to the late 19th Century -- the Sulzbergers.

The Three Rockefellers: One hundred years ago ....  our great-grandfather John D. Rockefeller Jr. began investing in New York banks to diversify the family’s business away from fossil fuels in the midst of the economic uncertainty. The result was the beginning of our family’s century-long association with what is today JPMorgan Chase, known in its earlier incarnation as the “Rockefeller Bank.”

Analysis: Standard Oil was established by John Rockefeller Sr. in 1870. It became the largest oil refiner in the world. By the time John Jr. joined the ranks of the Billionaire Bankers Club, the Family had 50 years of accumulated wealth to play around with. Only the Rothschilds were richer.

The Three Rockefellers: The similarities today are striking. A pandemic has killed more than a million people across the world and shows no signs of abating, and unease surrounds the economy.

Analysis: See how they promote the Stupid-19 Scamdemic? -- and then, in the next breath, transition to....

The Three Rockefellers: The long-term outlook for the economy is clouded by a warming climate and its foreseen consequences.

Analysis: Boom and boom. Stupid-19 and the Climate Con --- brought to you by the same clique and for the same reasons -- namely, the grinding down of living standards, the removal of personal liberties, and the elimination of national sovereignty.

AS THICK AS THIEVES!

1. A resurfaced 20-year old photo shows Bill Gates Sr., Gates agent Dr. Anthony Fauci of Stupid-19 fame, David Rockefeller, Ted Turner and George Soros at an award ceremony for billionaire "philanthropists." // 2. Covid & Climate --- Both Globalist HOAXES managed by the same clique of NWO devils which the criminals in Image 1 belong to.
The Three Rockefellers: The world’s biggest banks should do what our great-grandfather began to do in 1920 to spread the risks to his investments (though climate change was not yet on the horizon): move their businesses away from fossil fuels.

Analysis: See the game here? The Globalists, having seen their precious "Paris Climate Accords" blown up by Donald Trump, intend to arrest the development of the world through the intimidation of the corporations.

The Three Rockefellers: JPMorgan Chase made an announcement that appeared to align its activities with the Paris Climate Agreement without actually committing to curtail its lending activities to the fossil fuel sector, its major lever for change. The bank’s plan to “establish intermediate emission targets for 2030” in its loan portfolio is a welcome gesture.... Those targets must include specific plans to end support for the expansion of fossil fuel infrastructure and set a timeline for phasing out support of companies that lack adequate plans to move away from fossil fuels. (emphasis added)

Analysis: A direct threat to lending institutions. Get on board the Climate Con Train, or else. But does the Rockefeller threat have any teeth to it?

The Three Rockefellers: Banks face intense competition for new generations of wealthy clients set to inherit huge sums from the world’s richest people — estimates range from $15 trillion to $68 trillion — and the future is clear: For the generations that will experience the worst impacts of climate change, it will be a simple decision to put their money in banks that profit from reducing warming and leave behind banks that continue to finance carbon-intensive energy.

To that end, we have started an organization, BankFWD. This network of individuals, businesses and foundations will use their banking choices and public standing to persuade major banks to phase out their financing of fossil fuels and lead on climate matters. To earn the business of the future, banks must face climate reality. (emphasis added)

Analysis: Wow! These heinous heirs of evil ain't playin' games! From their website:

Founded by members of the Rockefeller family, the mission of BankFWD is to accelerate the transition to a just, zero-carbon economy by influencing banks to align their business strategies with the 1.5° target of the Paris Climate Agreement. (emphasis added)

If major banks are faced with the prospect of losing access to TRILLIONS of dollars worth of inherited assets, they can be compelled to hobble energy production on their own. These are pure Mafia-style extortion tactics, passed down from generation-to-generation of Rockefellers. We can only hope that the Justice Department and/or Securities & Exchange Commission is monitoring this clever 21st Century version of the Rockefeller racketeering and political subversion.
The Rockefellers -- A self-perpetuating plague upon humanity for more than a century.
Boobus Americanus 1: I read an editorial the New York Times today by three heirs of the Rockefeller Family. They have put together an initiative to have wealthy families essentially boycott banks that lend money for the development of fossil fuels.

Boobus Americanus 2: That's very noble of them.
*
St. Sugar: What frickin' "nobility?!" The Rockefeller ratss sstay rich. You get poorer.

Editor: We should also mention that the Family had a hand in setting up the Federal Reserve System -- through their trusted agent, Senator Nelson Aldrich, who was the maternal-side  grandfather of the five sons of John Rockefeller Jr.

MIKE'S BANNED BOOKS & PDFs
Post the link for this page to your FaceBook. Simply copy address below ...
realhistorychan.com/anyt-10132020--rockefellers.html 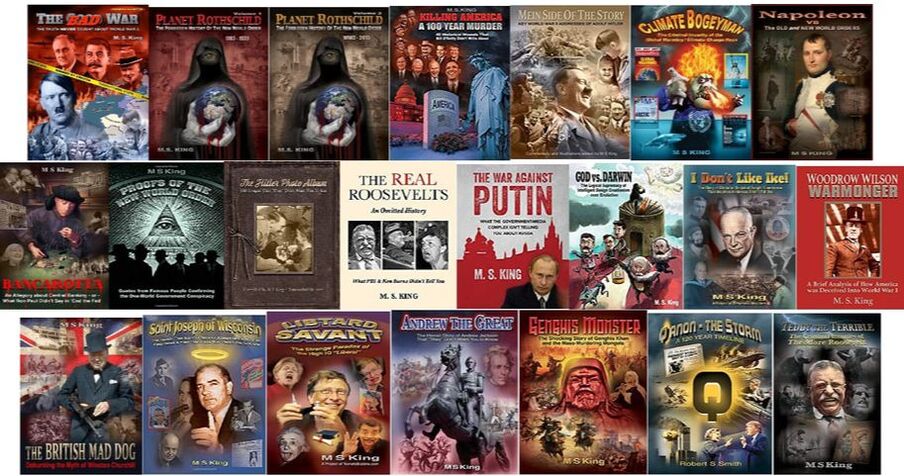