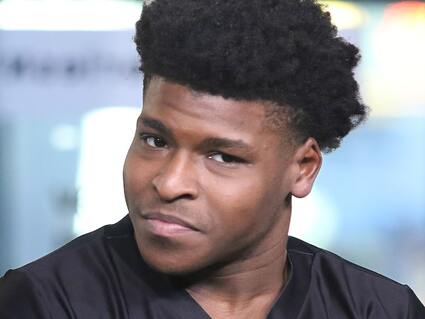 Mr. Harris, a fan favorite on the Netflix series, was arrested and charged with production of child pornography.
REBUTTAL BY

Oh "it's happening," boys and girls. Yet another child-sex pedo monster has been rounded up under the reign of Trump. What's particularly significant about this case is that -- unlike the relatively unknown politicians and mega-donors who have already been taken down in recent months -- this demon is someone that the entertainment-addicted normies of America can more readily identify with and be shocked by. From the article:

"Jerry Harris, a fan favorite on the Emmy-nominated Netflix documentary series “Cheer,” was arrested and charged with production of child pornography in a federal court in Chicago on Thursday.

Prosecutors said Mr. Harris repeatedly enticed a 13-year-old boy to produce sexually explicit videos and photos of himself and send them to Mr. Harris." (emphasis added)

Homosexual Harris -- a friend of fellow pedo-monster, Ellen Degeneres -- said in a June 2020 interview with Variety Magazine -- that as a Black "gay" celebrity, he wanted to be a "role model" ™ for young kids who might be struggling with their sexuality. (here) By that, he evidently meant that he wanted to corrupt the young minds and souls of little boys.
1. Ellen Degenerate -- in canary outfit (as in "singing like a canary") and a square bulge around her ankle. // 2. Homo Harris was heavily promoted by the recently disgraced, ankle-arrest-bracelet-wearing Degenerate -- whose TV talk show features color patterns and background very similar to the "temple" and background of Epstein's Island. // 3. A "role model" for kids, eh, Jerry?
The elite pedo-monsters lost their three-decades-long presidential protection when Trump bagged the child-sex-trafficking witch Killary Clinton in 2016. As cases large and small of child-sex-abuse now sink into the public mind, the Q Anon movement will continue to make gains in both numbers and in credibility. It will become harder and harder for the Piranha Press to dupe Boobus Normie with sarcastic references to "elite Satanic pedophiles" -- such as this dismissive description from the Slimes resident "Q-debunker," Kevin Roose, written just two weeks ago:

"QAnon is the umbrella term for a sprawling set of internet conspiracy theories that allege, falsely, that the world is run by a cabal of Satan-worshiping pedophiles who are plotting against Mr. Trump while operating a global child sex-trafficking ring.

QAnon followers believe that this clique includes top Democrats including Hillary Clinton, Barack Obama and George Soros, as well as a number of entertainers and Hollywood celebrities like Oprah Winfrey, Tom Hanks, Ellen DeGeneres and religious figures including Pope Francis and the Dalai Lama. Many of them also believe that, in addition to molesting children, members of this group kill and eat their victims in order to extract a life-extending chemical from their blood."

Ironically, Roose's summary -- though presented within the context of "these-people-are-crazy" mockery -- is spot on accurate. A few more cases like the Harris one and The Slimes may really come to regret the free negative (though accurate) publicity which its has bestowed upon the "baseless" ™ "conspiracy theory ™" that is Q Anon.

1. President Trump signs an Executive Order at the White House Summit on Human Trafficking. // 2. It's hard to condemn a movement fighting to save children from sex-abuse. // 3. Satanist "artist" Marina Abramovic poses with Jacob de Rothschild in front of 19th Century painting titled, "Satan Summoning His Legions." (based upon Milton's novel, "Paradise Lost")
Though the arrest of Homo Harris will help to awaken normies; some of the other abusive sex pervert and child sex pervert arrests which have recently adversely affected the Demonrat Party (and its fundraising capabilities) are worth noting. We already know about -- and are still learning more about -- Mossad operatives / sex traffickers Jeffrey Epstein and Ghislane Maxwell.

There is also the case of wealthy and well-connected Demonrat donor and "LGBTQ" activist Ed Buck -- arrested in 2019 after a 2nd young Black man died of an overdose in his home. Buck got his jollies off by luring, injecting, assaulting and anal-raping homeless Black men.

Peter Dalglish - a Canadian U.N. big-shot and friend of Prime Minister Trudeau -- was arrested in Nepal in 2019 and sentenced to  9 years for anal-raping two young boys, ages 12 and 14.

Though Buck, Nader & Dalglish are not exactly household names, these men were high-level players that can indeed be counted as elite members of what the late comedian George Carlin once described as "The Big Club." It is not by accident that they, Epstein / Maxwell, Homo Harris and others ended up behind bars after Sheriff Trump and Deputy Q took charge -- and that probably includes the arrest of Dalglish in a foreign country.

Boobus Americanus 2: Lately, I've been hearing more and more about such cases. You think those Q Anon people might be on to something after all?
*
St. Sugar: Ya ain't sseen nothin' yet, Boobuss.