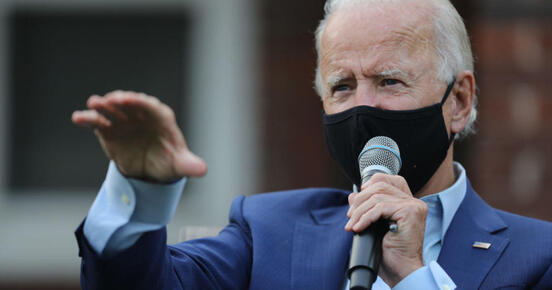 Hark! And drop to your knees, boys and girls. The Trumpets of Holy Mt. Olympus are calling us to secular prayer. Those seditious sages of "Scientific American" Magazine (bow your heads in solemn reverence) have, for the first time ever, made a presidential endorsement -- for Creepy Pedo Joe Biden, of course. The threat of the "anti-science" Trump winning a 2nd term is that serious.

“The pandemic would strain any nation and system, but Trump’s rejection of evidence and public health measures have been catastrophic,” the editorial said, pointing to the president’s misleading statements downplaying the virus’s severity, his early disparagement of mask-wearing, his chastising of governors who declined to reopen businesses in their states and his administration’s well-documented testing failures."

How and when did this once-venerable 175-year old science journal transform into the Unscientific UnAmerican? Well, it didn't happen overnight, but somehow, we suspect that "the usual suspects" had a hand in corrupting it. The article gives us a clue:

"The editorial, which was bylined by the magazine’s editors and primarily written by Josh Fischman, a senior editor.

Fischman, eh? (cough cough) --- Every -- Single -- Time.
1. The "Scientific American" is neither. // Josh Fischman's "unprecedented" anti-Trump editorial is the talk of Fake News.
Libtard Laura Helmuth -- Phd. from Marxist Cal Berkeley University and then the Washington Compost -- became editor in chief of Unscientific UnAmerican this past March -- just as the Stupid-19 Scamdemic began exploding in the public mind. The devious douche-bag states the reasons for this stunt thusly:

"He (Trump) has been so much worse than we warned. The evidence was there already that he rejected expertise, that he embraced conspiracy theories, that he wasn’t interested in getting the right answers — just interested in projecting his own ideas. His administration has been just a disaster for science at every level."

To the 180-degree contrary, Laura -- while you Fake Scientists were peddling unwarranted fear, stupid "social distancing" policies, moronic mask mania and a dangerous Bill Gates microchip vaccine; it was Trump -- the nephew of one of America's preeminent physicists / electrical engineers -- who introduced the public at large to the scientifically proven benefits of both the Hydroxychloroquine wonder drug and ultraviolet light cleaning as well as the ongoing research into internal UV therapy. The real "disaster for science" is the political corruption which has muscled out the honest scientists and replaced them with money/fame-hungry and/or politically motivated charlatans.
1. Libtarded Laura "sheltering-in-place" during peak Stupid-19. This ass-clown is now the editor-in-chief of Unscientific UnAmerican. // 2. When the great Nikola Tesla (l) died in 1943,  John Trump (c) was the scientific genius that U.S. Military Intelligence brought in to study his papers. President Trump was close to his uncle and respects true science greatly.
The Unscientific UnAmerican's anti-Trumpism over Stupid-19 aligns perfectly as the ideal bookend for an article appearing in the January 30, 2020 issue of the elitist Globalist magazine, "The Atlantic." That "prescient" piece -- penned about 30 days before peak CoronaMania hit -- hinted early on to the muckety-mucks who read such "high-brow" propaganda as to what was to come. Headline: Coronavirus Is Coming—And Trump Isn’t Ready (here). It was authored by very deep Deep Stater Ronald Klain (cough cough) -- who served as Chief of Staff (handler) of both Vice Presidents Creepy Joe Biden and Al Gore, and also as the "Ebola Czar" under Barry Obongo -- which really gave the game away:

Yes  -- (((they))) "all knew" all right --- because it was a damn CONSPIRACY!
At a time of clearly evident "dying in the streets" crisis-actor fakery (same dead man in all blue in THREE different positions and locations?) coming out of Wuhan, China (or maybe, Chinatown or CIA-infested Hong Kong?) -- Deep State asset, Biden-handler and "prophet" Ron Klain warned that the "coming-to-America" Coronavirus would be a test for Trump, which he would "fail."
Boobus Americanus 1: I read in the New York Times today that the Scientific American Magazine endorsed Joe Biden for president. It's the first time they have ever made a political endorsement.

Editor: Actually, I'm not at all 100% convinced that this "new" strain of coronavirus was ever properly purified, isolated and identified -- in which case, it's just one of the same old nasty colds floating around year to year.