For nearly half-a-century, the financier Bernard Baruch (cough cough) wielded immense political power from "behind the scenes." It was Baruch who, according to Curtis Dall, introduced the future president Woodrow Wilson to New York city political elite "leading him like one would a poodle on a string." Baruch later exerted similar career-making dominance over ambitious scoundrels such as Winston Churchill and Dall's father-in-law, Franklin Demono Roosevelt -- the two main front protagonists who started World War II, at the behest of Baruch and his fellow Jewish finance mobsters.

Among "conspiracy theorist" historians, Baruch's decades-long control over scum such as Wilson, FDR, Churchill and Harry Truman is fairly well known. What fewer real historians are aware of, however, is Baruch's critical role in grooming and promoting the ambitious military men who were needed to eagerly carry out the orders of those political buffers. These traitor generals included John Pershing and Fox Conner of World War I fame, as well as George Marshall and Dwight Eisenhower from World War II.

The following excerpt from "I Don't Like Ike" (by yours truly) reveals a glimpse of the military component of the Jewish Mafia plot to embroil the United States into a second war against Germany. Enjoy it --- and then buy the book or pdf.
1. The "Wall Street Legend" and notorious war profiteer Bernard Baruch was the George Soros of his era. // 2. In 1912, Baruch led presidential candidate Woodrow Wilson Wilson around New York "like a poodle on a string." Wilson, under the control of mighty Jews Baruch, Warburg & Schiff, then ushered in the Federal Reserve System scam and the Income Tax, before dragging the USA into World War I with Baruch heading up the all mighty, economy-controlling "War Industries Board." // 3. Twenty years later, Baruch used FDR to drag America into yet another war for Globalism and Zionism.
1. Big Baruch rescued (bought) little Winnie the drunken, spendaholic, gambler during the stock market Crash of 1929. (here) // 2. Baruch's deep pockets also saved Harry Truman struggling Senate re-election campaign in 1940 (here). Hiroshima Harry would become FDR's new Vice President in 1944, and then President when FDR died in April of 1945.
JULY, 1939
GEORGE MARSHALL & BERNARD BARUCH PLOT A NEW WAR

It was not for nothing that the rocket-like upward mobility of George Marshall paralleled that of Dwight Eisenhower  -- although Marshall, who was 10 years older, had a head-start. Both men were pulled up the ladder by World War I Generals Fox Conner and John Pershing, and, more importantly, Bernard Baruch.

As General Pershing’s aide, Lt. Colonel Marshall had become personally acquainted with Baruch in 1918. By 1922, Marshall was hunting ducks down in Louisiana with Baruch and Pershing (here). In later years, after World War II, Marshall once described Baruch as: “one of my dear friends and one of the great helpers"

Marshall and Eisenhower first worked together during the 1920's, under Pershing, another self-described "dear friend" of Bernard Baruch. Because the Baruch-Pershing-Marshall-Eisenhower complex was so intertwined, it's worth reviewing the contents of letters which Baruch and Marshall exchanged in July 1939, at a time when:

1. Europe itself was not even at war
2. Hitler was passionately pleading with Britain and France for peaceful dialogue (not war!) regarding the situation of German minorities being abused in Poland.
3. Few people in "isolationist" America would even have imagined that FDR and his crowd were preparing for another world war.

As you are aware, or can find out upon inquiry, I did as much as anybody to stir up the action which resulted in the expenditures which are giving the Army a part of what they need. I know we have not yet a well balanced program and as soon as I get on my feet, I am going to go after it again. I was in hopes we would have a neutrality legislation that would permit the manufacture of airplanes and the export thereof during war, because I wanted to see a development in this country that our orders alone would not permit.

Also, I wanted the United States to take first place again in quality and quantity.... Always remember that the Army, and you particularly, have a friend in me if I can be of any use.”

(Baruch’s letter also mentioned that General Pershing had visited him in the hospital).

* (The astute reader will note the "kissing-the-boss's-ass" undertone evident in Marshall's writing.)

I have just this moment read your letter of July 19th, and learned for the first time of your misfortune in having to undergo a mastoid operation. My full sympathy goes to you, and I am delighted to judge from your letter that you have fully recovered.

I have been concerned about General Pershing’s health in France, as he had—most confidentially—several attacks. He has endeavored to minimize this, and emphatically denies them. I suppose they are inevitable under the circumstances, but it worries me to have him off in France even though he seems to be particularly happy there the pleasanter period of the year.

I am well aware of your important part in the stirring up of the national conscience to our serious situation last year, and the tremendous effect it had on public opinion.

I do hope I may have an opportunity to talk things over with you personally, and if I am in New York I will try to make an appointment with you in advance, and if you are in Washington I hope you will lunch with me.

I have an invitation to shoot ducks at the mouth of the Mississippi (with Mississippian and good friend Fox Conner?). It should be “to shoot at ducks,” but it recalls a very amusing expedition with you.

With warm regards, and thanks for your letter

The Marshall-Baruch correspondence clearly reveals a plot to build up the U.S. military for a pending war by undoing post-World War I neutrality legislation. It can rightly be described as treasonous and conspiratorial. And indeed, not long after war broke out in Europe, FDR, while promising that the USA would stay out of it, repealed the neutrality acts and started shipping war supplies, first to the British, and later on, to the Soviets.

In regard to the military component of the evil plot to again foment another, even more destructive war in Europe -- and then, to again manipulate and maneuver the American people into that war, clique-member Eisenhower was, obviously, also "in on it." The super-ambitious Eisenhower - a low officer with a checkered record who helped General Pershing to write his post-war memoirs -- became a willing subordinate of Baruch's as far back as 1929 (see "I Don't Like Ike," page 61). He (or, most likely, his ghost-writer, Globalist, academic brother, Milton Eisenhower) served King Baruch by writing papers in support of resurrecting a new type of War Industries Board during the 1930's.

** End of Excerpt***
1. In Mafia parlance, Baruch "made" General Pershing, pictured in Image 1 (on left) with WW 1 sidekick George Marshall -- who would soon also be "made" into a big-shot by Baruch and Pershing. // 2. Baruch, Pershing and Marshall then "made" Eisenhower (a lowlife rat who was almost kicked out the army for financial fraud.) Baruch's second war against Germany brought "hero" status upon the two traitorous generals who deliberately murdered 1.5 million German POW's after handing Eastern Europe over to Joe Stalin.
*
Exactly as plotted out in the 1939 letters between Baruch and Marshall, FDR changed the existing neutrality act which had forbidden US military exports to warring parties. The ability to ship arms to the UK on a "cash & carry" basis paved the way for Britain's warmongers to pick a fight with Germany. Later on, a total repeal of the amended act would allow arms to be shipped as part of lease deals (Lend Lease).
1. Eisenhower linked up with Baruch while he was still an unknown, low-level army officer. // 2. Their longtime "friendship" with the mighty financier lifted Churchill and Eisenhower (both of whom were incompetent) to the highest positions of military, then political authority. Image 2 depicts Baruch meeting with then-Prime Minister Churchill (his 2nd go-around as PM) and then-President Eisenhower, at Baruch's home. // 3. Marshall, who in later years became Secretary of State under Harry Truman (another known pawn of Baruch's), greets his old "friend" and master Baruch at the airport.
A Must Read! In paperback or pdf --(all books: here)
Tweet
E-Mail: GreatTomatoBubble2@Gmail.com
* If you like the free RH Chan items, you'll LOVE the 'donors only' stuff! 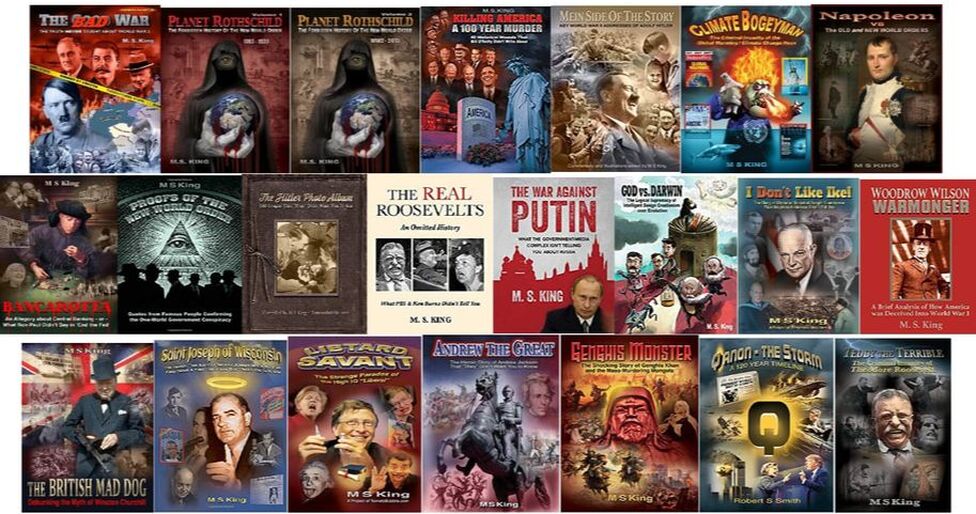