You know who you are.

You are the one who hangs on every word of the oh-so-authoritative CDC.

You adore that money-grubbing, vaccine-peddling midget St. Anthony Falsie -- perhaps even pleasuring yourself to the sound of his raspy voice.

You lecture all of us to “follow the science” when you yourself have actually never examined any real science regarding this matter.

You trust the multi-millionaire talking-heads on your TV set while reflexively denigrating critical independent thinkers as “conspiracy theorists.”

You dismiss us as "paranoid" for claiming it's a hoax -- as you nervously piss your pink panties over every breathless news report of a new "surge" in cases.

You obediently and gladly wear those silly useless masks and “social distance” – even when you are not required to.

You have a virtue-signalling "Thank You Health Care Heroes" sign on your front lawn. Evidently, dutifully showing up for work and euthanizing elderly flu victims in between "Tik Tok" dance videos is now considered "heroism."

You cast dirty looks at us nostril cheaters as you bathe in hand sanitizer.

You abusively isolated your elderly parents or grandparents simply because you were ordered to.

You allowed the "powers that be" to steal your Christmas, Thanksgiving, graduations, weddings, birthday parties, funerals and other family events.

You alienated family members who dared to think for themselves.

You screwed up your own children – stunting their scholastic growth, ruining their sports seasons, and turning them into pussified germophobes during their formative years.

And now, after 18 months of this geo-political con-job designed to control society and transform political & economic systems worldwide; and even after you obediently took your “magic jab” in the arm – you are again pissing and moaning about “The Delta Variant” and aggressively virtue-shaming us rational folks for not submitting to a  “Fauci Ouchie.”

“Anti-vaxxers” are putting society at risk! They pose a health risk to the public. They must be compelled!”

No, not exactly, my dear normie. With no due respect, the mob morality of your commie cult really disgusts those of us who dare to think – and those of us who still hold to quaint outdated ideals such as liberty and "conspiratorial" notions such as mistrusting powerful people and institutions. You know, this attitude we have that we once proudly called Americanism. Have you forgotten Ben Franklin's timeless proverb?

"Those who would give up essential liberty, to purchase a little temporary safety, deserve neither liberty nor safety."
1. Dr. Anthony Fauci -- a dishonest publicity-seeking bureaucrat connected to the Bill Gates / WHO crime syndicate -- poses as an "infectious disease expert." // 2. Following corrupted "scientists" on the government payroll doesn't make one "educated." // 3. A useless and, in some cases, even dangerous vaccine for a non-existent "novel" coronavirus.
If you want to know who the true public menace is, have a look in the mirror, normie. It is YOU! Your mental laziness, moral cowardice and irrational obedience to the New York Times and the TV screen is – more so than any government mandate or armed Federal agent could ever be -- the true foundation upon which the horrible and unnecessary tyranny of the past couple of years was built upon.

It is because of YOU that so many businesses and lives have been ruined.

It is because of YOU that so many suddenly defenseless seniors have had to endure soul-crushing loneliness in the killer nursing homes and hospitals -- waiting for the medical ghouls to purposely stop their hearts as part of the cost-saving "Living Will" / DNR (Do Not Resuscitate) scam that you've all been tricked into.

It is because of YOU that we are now experiencing the inevitable price-inflation caused by the historic levels of debt-based money printing mandated by the Covid scam.

It is because of YOU that future generations will be stuck paying the enormous bill, plus interest.

It is because of YOU that suicide rates, particularly among young people, have risen.

It is because of YOU that so many people have gained weight sitting at home while the gyms were closed. Oh you're so "health conscious," aren't ya?

I know. I know. “It was all necessary to save lives.” And, “Rights are subject to restrictions when they threaten others.” Right? Newsflash, normie! You’ve been played for a paranoid fool. Let’s “follow the science” – the real science, shall we?

* REWARD!
RealHistoryChan.com will make an immediate retraction and issue a $300 cash reward to the first person who can disprove any of the following statements. Send your fact-based challenge (if you can) to: RealHistoryChannel88@Gmail.com.

* Not a single government agency in the world has been able to provide – through Freedom of Information requests – any confirming data proving that the “novel” (new) coronavirus of 2019 was ever scientifically isolated and identified. If they cannot, that suggests that it’s actually just the same old cold & flu of years past. In fact, as part of a court case in Canada against a Covid “non-complier” in the province of Alberta, the state was not able to produce such records (later claiming that the defendant did not file his subpoena properly).

* The PCR “test” which is used to “diagnose” the imaginary illness was never intended to be used as a diagnostic tool. The inventor of the process – 1994 Nobel Prize winner Kary Mullis – said so himself!
Mullis: “With PCR, if you do it well, you can find almost anything in anybody. If you amplify one single molecule up to something you can really measure, which PCR can do – then there are very few molecules that you don’t have at least one of them in your body. So that can be a misuse of it, to claim that it is meaningful.”

Dr. Mullis ought to know. PCR is his baby! By the way, the distinguished Dr. Mullis (who conveniently died just before the Covid scam started) despised St. Anthony Falsie and referred to him as a liar for the way he was already misapplying the PCR to diagnose other fake diseases.

* Even with the fake test results, hospitals and nursing homes have been authorized to diagnose “cases” by “symptoms” and “presumption.” This means that anyone with the sniffles or a fever can be tagged as “Covid.” .... Cha ching!!!

* There is no evidence to show that masks can prevent the spread of viruses. The micro "bugs" are generally not airborne, and can easily penetrate through the fibers of your bacteria-infested, oxygen-limiting mask as a mosquito would through a chain-link fence.

* According to CDC statistics, a person in his or her 50s, without any other pre-existing life-threatening conditions, is about as likely to choke to death during a meal than of dying from “Covid.” (which isn’t even real). So then, why are you not pureeing all of your food?

* Hospitals and nursing homes were paid $10,000 for each diagnosis of “Covid” and an additional $39,000 for each patient then placed on a dangerous ventilator. Sheer greed (by design of the master planners) drove our “health care heroes” to list deaths by pneumonia, flu, COPD, asthma attacks, strokes, diabetes, heart attacks etc as “Covid.” Murder victims were even tagged as “Covid!” And a few brave doctors have come forward and admitted that administrators are “pressuring” them to list “Covid” on death certificates.

* Several countries (Sweden & Belarus in Europe, for example) mostly ignored the “pandemic” and never shut down nor masked-up (although Sweden, after months of intense international pressure, did finally ask people to voluntarily "social distance.") And yet, life went on as normal in those countries. Were you even aware of that?

We shall repeat the offer:

REWARD!
RealHistoryChan.com will make an immediate retraction and issue a $300 cash reward to the first person who can disprove any of the above statements. Send your correction to: RealHistoryChannel88@Gmail.com.


* Payouts will be made on the basis of substance -- not minor disagreements and clever misinterpretations.
1. Kary Mullis receives Nobel Prize in Chemistry for inventing PCR -- which was NOT intended for diagnosis. // 2. President Lukashenko of Belarus referred to Covid-19 as an "international psychosis." His country remained open and healthy. // 3. The self-promoting "Healthcare Heroes" got paid big bucks for sedating seniors to death and tagging everyone with a cold or flu as "Covid" on the death certificates.
While the rest of us were FORCED to lock down, mask up and "socially distance".....
1. Swedish beach in Summer of 2020 /// 2. Belarus political rallies, Summer of 2020
What powerful networks of Globalist manipulators are behind this historic scare hoax, and to what end? Well, that’s a whole other story – a long story which you can begin to learn about right here at RealHistoryChan.com (see “Banned Books” page). But for purposes of this Open Letter, suffice it to say that YOU, dear servile Nanny Stater, have been played for a fool in a very dangerous game. Dismiss this as "conspiracy theory" if you like; but know this: Anyone who is not a "conspiracy theorist" in this day and age of universal deceit (especially in high places) is a frickin' idiot!

Now if you insist upon still wearing that stupid mask, social distancing, and getting jabbed and re-jabbed until all the fake-ass “variants” run out of Greek letters, then feel free to do so as the rest of us (as well as future generations) exercise our own right to laugh at you. Just stop vilifying us as uninformed and uneducated enemies of society when, in reality, YOU ARE!
1. Study "Planet Rothschild" -- by M S King // 2. Turn off controlled Fake News --- Turn on your brain. // 3. Quote by the immortal H.L. Mencken sums it up very well. 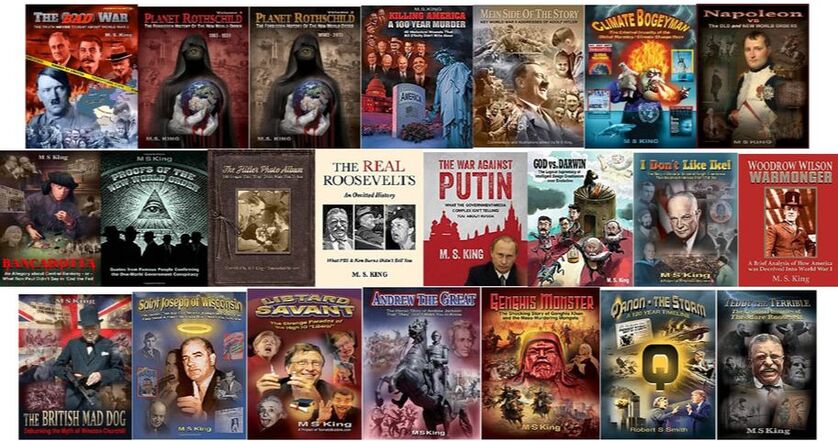